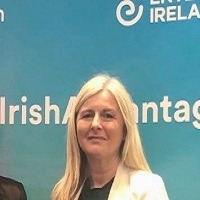 Catrina Sheridan has over 22 years within the product management and marketing arena where she led and managed many of the world’s brands in the top 500 FTSE companies. Her career started in the US where she worked in the retail buying offices of Macy’s and subsequently moved to commercial research for Synovate, the 5th largest research organization in the world. She joined one of her clients CPC/Unilever where she managed the expansion of the Hellman’s brand into dressings in North America and UK.

She then moved back to Ireland to mange a global sets of brand in the drinks industry for Edward Dillon’s including Bacardi, Hennessey for major brand holders including, Diageo, Brown Foreman, Bacardi and LVMH. During this time, many of the brands achieved the highest per Capita consumption in the world, in Ireland. Catrina then subsequently moved to BT globally in a market strategy and planning role during the inception of BT Global services. She then moved back to a local role as Strategy and Marketing Director where she managed the transition from Esat to BT brand and also to an a’ll Island’ structure for the company.

Catrina then joined the new venturing arena, where she was Vice President of dotMobi a global mobile internet company which was sold. She subsequently completed a management buy –in of Blueface, a start-up internet telephony company. Key achievement during her tenure at Blueface included capital fundraising, pivoting the company to SME proposition for sustainable advantage and delivery of MVNO deal and several strategic partnerships as well as garnering Deloitte Fastest growing technology company.

Catrina has a B.SC and and MA from Trinity College Dublin, and a M.Sc in Executive Leadership from University College Dublin/Boston College. She has written and researched in the area of capital financing and her work was recently presented at an international conference in Amsterdam. She is a board Director of To Russia With Love a charity which is based in Bryansk, Russia and sits on the advisory of a number of start-up organisations.

View Catrina’s LinkedIn Profile by clicking the icon below.

Back to Mentor Page